Ragehorn is the first Dragonkin you will get from the dragonkin land. In this Guide, we will discuss Skills of Ragehorn. and how these skills will help you in growing and fighting. If you don’t know about dragonkins system check out our basic guide for Dragonkins. 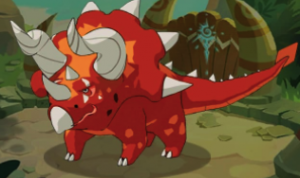 Ragehorn Attack Enemy with his Bulky body and deal damage equal to the 2% (Max 30%) of your troops total attack + 3.77%(100 Attack provides additional damage of 1%)

Knock is very Basic skill that everyone can upgrade it and it’s quite powerful. Let’s suppose if you max your skill and send an attack to the enemy with 200k troops then your attack damage will be equal to the damage from 260k troops. So always take your Ragehorn in battle like you take your partners with them.

It is permanent skills that will increase your construction speed by 5% (Max 40).

After using it, your troops attack and defense will increase upto 100% in the single active battle outpost attack. CD:48h

After the Battle, 2% (Max 16) of your lost soldiers(rally soldiers not included) will become hospitalized, but they can’t exceed your healing capacity.

Rescue skill is very helpful. Let’s suppose you have Max level Rescue skill and you sent 300k troops to attack an enemy and your 100k Troops is killed during the battle. With this Skill your 16% of the killed troops that means 48k Troops will be returned to the hospital. it saves almost 50% troops from killing.

Note –  you can upgrade Skill Level to increase the effect of the skill.