Some partner has the ability to put Buff on itself and teammates. and some can put debuff on the enemy. In this guide, we listed all the Buffs and Debuffs with their meaning that used in brutal age partner system.

Buff – A Buff is a temporary positive effect placed on the partner. and give some extra advantages to the player. it can be any from the given list below.

Debuff – Debuff is contrary to buff, it’s a negative effect on the partner. 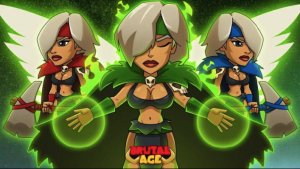 Deflection – Deflections may occur during attacks. It will reduce the damage by 30% for this attack and cannot inflict debuff on the enemy. Deflection rate will be influenced by Partner attributes (color) and debuffs.

CR – It has a basic 15% chance to deal CR in attacks, if the attack is a CR attack then it will increase the damage of the current attack by 50%. CR Rate is influenced by Skill, War Pattern and partner attributes (color).

Bash – It has a chance to deal Bash in attacking restrained targets. Increases the damage by 30% for current attack.

There is 75% chance to fightback after being attacked.

Add shield which can absorb a certain amount of Damage.

It has 50% chance to deflect Hit. if successfully deflected then the damage will reduce to 30%

Reduce getting CR chance by 50%.

Reflect 30% of the Damage

Provide energy Sheild to the team.

Heal/Recover a certain amount of HP.

Immune to any debuff but it won’t dispel Existing Debuff.

In this status, Partner won’t suffer any damage.

Can’t Get any Buffs

Revive Immediately itself with 30% of max HP after being defeated.

The target is protected by a teammate from any damage and the teammate takes 50% of the damage.

Each Round Deal Damage by 5% from max HP

Can’t use Skills with CD

Can only use the first skill to attack the taunter.

HP won’t be lower than 1 when being attacked.